Pandit Hari Prasad Chaurasia – Padma Vibhushan Hari Ji is a world-renowned music director and classical flutist, who plays the bansuri in the Hindustani classical tradition. Considered a rare combination of innovator and traditionalist, he has expanded the expressive possibilities of the bansuri through his masterful blowing technique.

Vishwamohan Bhatt – He is a legendary musician and exponent of Indian Classical music. He plays the Mohan Veena, a 19-string slide guitar/sitar combination he designed four decades ago. He is also a Grammy Award winner.

Bickram Ghosh – He is ranked amongst the greatest Tabla players in India. He has carved a unique niche for himself in his diverse avatars as a classical musician, new – age artist and composer. While he has played on four Grammy nominated albums and one Grammy awarded album, he also has an Oscar contention as a composer .

Ashwini Bhide Deshpande – She is a famous Hindustani classical vocalist and composer. She is one of the most authentic representatives of the famous Atrauli Jaipur Khayal Gayaki tradition in the present generation of khayalias.

Tarun Bhattacharya – He is an Indian classical musician who plays the santoor. His special technique of playing the santoor facilitates the playing of “Krintans, Ekharatans, Bolton’s” broadening the use of santoor in various traditional art forms.

Partho Sarathy – He is blessed with an exceptional artistic temperament, exacting technical precision and a rare aesthetic sensibility, Partho Sarothy is considered one of the most engaging, intelligent and talented instrumentalists in contemporary Hindusthani music.

Shubhendra Rao – He is a composer and well-known sitar player in India. He is a protégé of world-renowned Sitar maestro, Pandit Ravi Shankar. He has established himself not only as a master of his instrument but also as a thinking musician, constantly endeavoring to carry his instrument beyond conventional boundaries and a musical bridge to many cultures. Critics and connoisseurs hail him as a worthy successor to his Guru’s legacy. 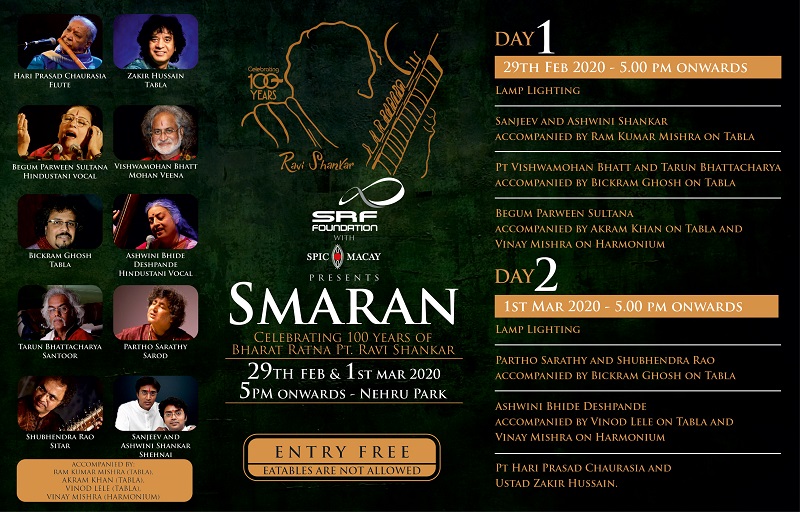 Entry to the concert is free for all, no invitation required.

About the Host:
SRF Foundation, formerly known as the ‘Society for Education and Welfare’ was set up in 1982 as the Corporate Social Responsibility (CSR) arm of SRF Limited, which is a diversified, multi-business entity engaged in the manufacture of Chemicals, Packaging Films and Technical Textiles.

SPIC Macay is a voluntary organization with the aim of promoting Indian classical music and culture amongst the youth, founded by Dr. Kiran Seth.