The Tughlaqabad fort was built by Ghiyas-ud-din Tughlaq during the 14th century. The Fort is located on the Mehrauli-Badarpur road, Delhi. Tughlaqabad fort opens at 6 AM and the entry fee is Rs. 15 only.

In a state of total damage, the Tughlaqabad fort was once a representative of the might of the Tughlaq dynasty. The fort is extended over a wide-ranging area and a part of the architectural wonder. The fort-city of Tughlaqabad was supposed to have as many as 52 gates, out of which only 13 remain now.

The Story behind the ill-fate of the fort is that an angry Ghiyasuddin forbade the sale of oil to Nizamuddin, so no lamps could light up the construction site at night. The saint then magically turned the water in his tank to oil, and cursed Tughlaqabad: Ya base Gujar, ya rahe ujar which means May this be inhabited by herdsmen or remain unoccupied.

Even though the fort is in a condition of ruins, it bears testimony to past glory and might of the Delhi Sultanate. The enormous ramparts, battlements and the enormous stonework of Tughlaqabad fort speak highly of the architectural skills and progression of the craftsmen. The Tughlaqabad fort served a double purpose of a suspicious structure as well as the regal capital of Ghiyas-ud-din Tughlaq. There are a number of monuments within the grounds of this very big fort. 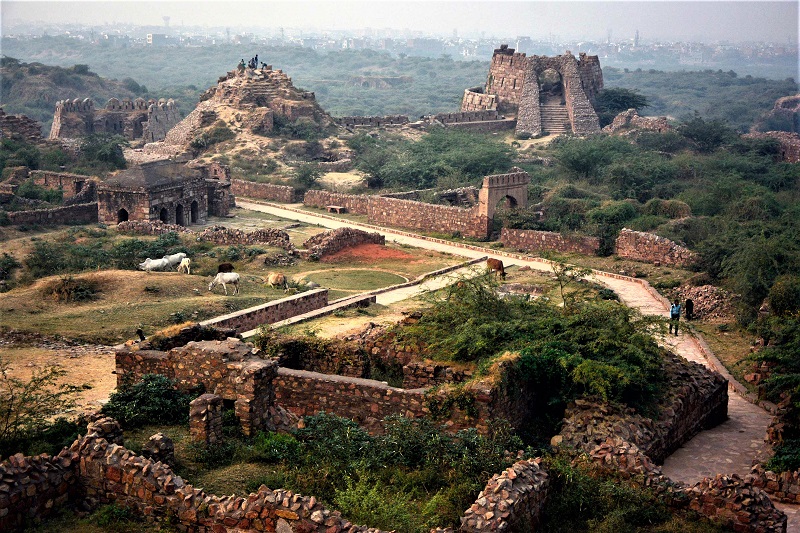 Tughlaqabad Fort adjoining metro station is Okhla Metro Station located on Violet Line. It is 7 KM away as of the fort.
Address: Tughlaqabad Fort, Tughlakabad, New Delhi, Delhi 110044 (On the Mehrauli-Badarpur road)

Entry fee for the fort is awfully reasonable, as Indian tourist has to give 15 Rs and Children up to 15 years are eligible for free entry. Foreigners can enter in the fort by buying an entry ticket of 100 Rs. Visitors of SAARC and BIMSTEC Countries have to give 15 Rs for Entry Ticket.

Fort opens all day of the week, as its Opening time is 6 AM (depends on season) and it closes at 6 PM. Winter and Monsoon season is the finest season to visit. If you are visiting in the summer season, morning time will be the most excellent time to visit the fort.