Skip to content
Rajasthan Things to Do In Pushkar Travel

Brahma Temple in Pushkar (Rajasthan) is the only temple in India that is dedicated to Jagatpita Lord Bhrama. The Bhrama Mandir/ Temple is located very close to the sacred Pushkar lake, where the Lord Brahma has performed yagya(sacrifice). Legends say that one can attain salvation by a bathe in Pushkar lake on full-moon/Kartika Purnima in the month of oct-nov.

Every month thousands of devotees and tourists from all cultures visit Pushkar’s Brahma Mandir. The best time to visit the temple is in the month of Oct & Nov.

The Mythology of Brahma Temple, Pushkar:

According to the Padma Purana(Hindu Scripture), there was a demon Vajra Nabha who was harassing people and also killed the sons of Lord Brahma. The lord got angry and killed the demon with his weapon i.e. lotus flower. During the fight, 3 petals from Lord Brahma’s lotus fell on the earth. The petals created 3 small lakes; the largest one is called Jyeshtha i.e. Pushkar Lake. Pushkar – “Pushpa” means flower and “Kar” means Brahmas hand.

Why Brahma performed Yagya at Pushkar Lake?
According to the legends, lord Brahma wished to perform a sacrifice (yajna) to cleanse from the act of killing. He decided to perform the yajna at the same place where the lotus petal fell i.e. Pushkar Lake. To perform the yagya peacefully, Lord Brahma created hills around the Pushkar and positioned gods there to protect the yagya from the attack of demons. Lord Varaha(incarnation of Vishnu) also acted as a protector of the yagya, so you will also find Varaha Temple near Pushkar Lake.

Why only one Brahma temple in India?
Brahma was to perform the Yagya with his wife Savitri (Saraswati). At the designated time of yagya, goddess Saraswati was late as she was waiting for her companions (goddesses Lakshmi, Parvati and Indrani). As per the Hindu tradition, a man cannot perform a Yagna without his wife. And the time was so auspicious that Brahma doesn’t want the moment to pass. Lord Brahma, therefore, asked lord Indra to find a suitable girl who can sit by his side as his wife and complete the Yagya. Indra soon found a milkmaid’s daughter(gujjar),  she was then purified by passing through the body of a cow (cow is considered to be pure & the mother of all the gods). Lord Shiva, Vishnu and other gods certified her purity and named her Gayatri – the goddess of milk. Lord Brahma married her and completed the yagya on time. 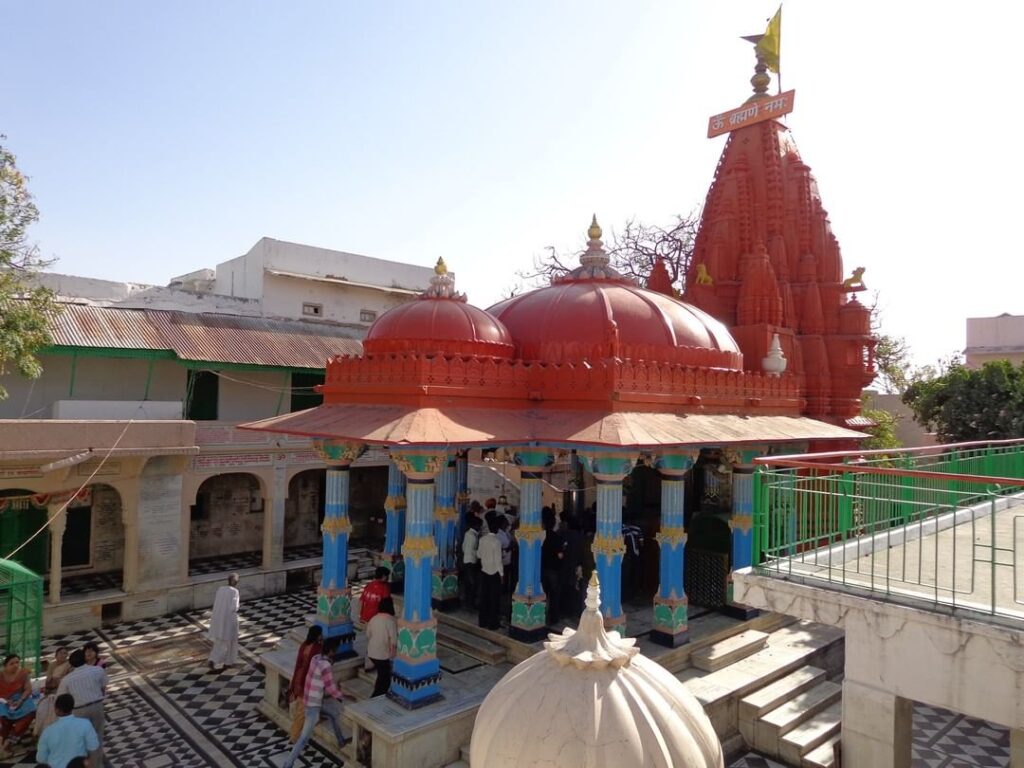 Why is Brahma temple only in Pushkar and Why is Brahma not worshipped?
When Saraswati arrived, she saw Gayatri sitting at her place, next to Brahma; she got very angry. Furious goddess Saraswati cursed Brahma by saying he would only be worshipped at Pushkar.

Saraswati/Savitri then cursed god Indra(lord of heaven) that anyone can easily beat Indra in a battle. She cursed Vishnu that he will suffer the separation from his wife when he will incarnate as a human(Rama). Savitri also cursed the Agni dev that who-so-ever will officiate the yagya will be poor. She cursed and then went away to Rathkagir hill, where there is a temple dedicated to Goddess Saraswati/Savitri.

Why Pushkar is called Teerthraj?
But then goddess Gayatri diluted the Saraswati’s curse, blessed Pushkar to be the Teerthraj, the king of pilgrimages.

She also said Indra will never lose control over heaven and When Lord Vishnu will incarnate as a human, he will finally unite with his wife. The priest who performs yagya will be the scholar and will get great respect in society.

How old is Brahma Temple Pushkar?
According to the legends, Pushkar’s Brahma temple is more than 2000 years old but the present structure of the temple dates to the 14th century. 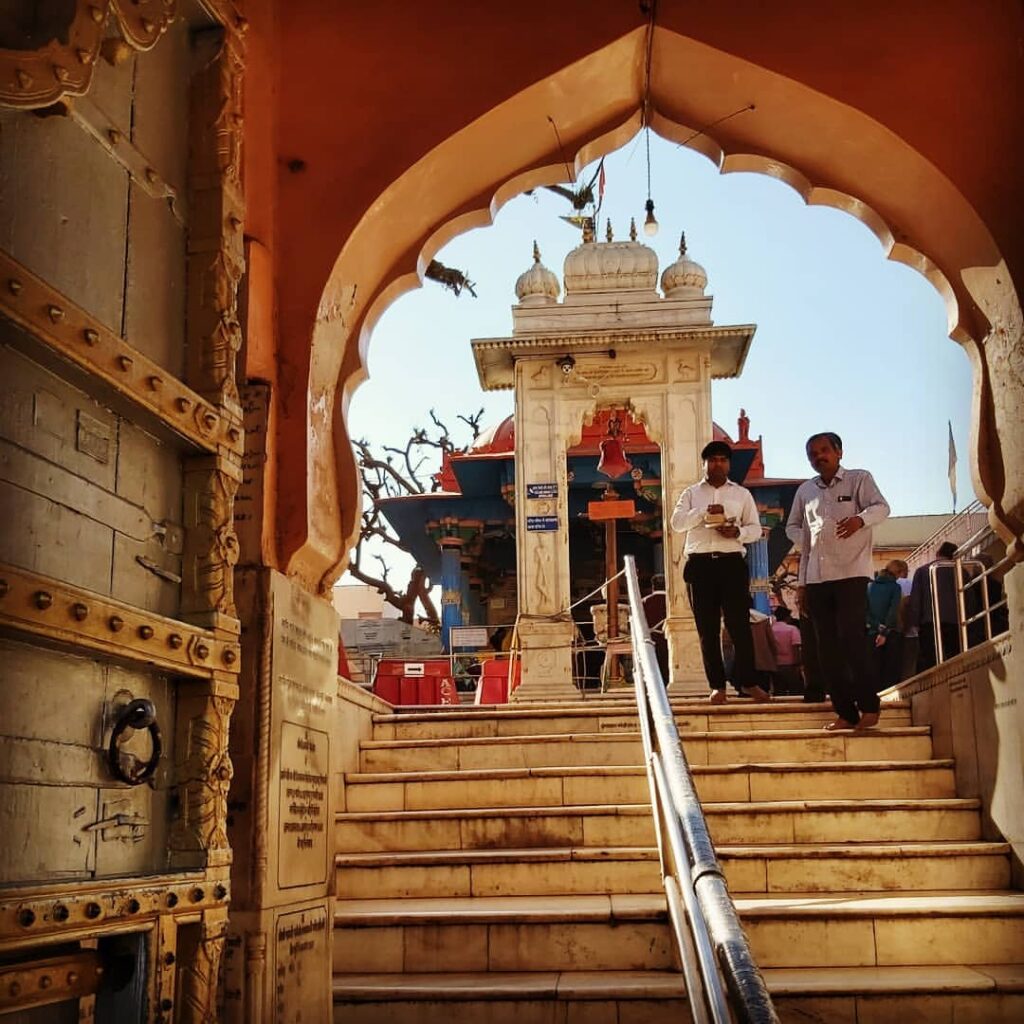 Who constructed the Brahma temple Pushkar?
It is believed that Brahma himself selected this place for the temple. The temple was constructed by sage Vishwamitra. Later on, Adi Shankaracharya, the 8th-century philosopher renovated the temple.

During the rule of Mughal emperor Aurangazeb(1658–1707), he destroyed the Brahma Mandir along with many other temples in Pushkar. Then Maharaja Jawat Raj of Ratlam repaired and renovated the temple. Since then there is no major changes are done in the temple.

A flight of marble steps leading to the entrance gate which has an amazing archway. On the top, decorated with pillared canopies which make the temple look very graceful. 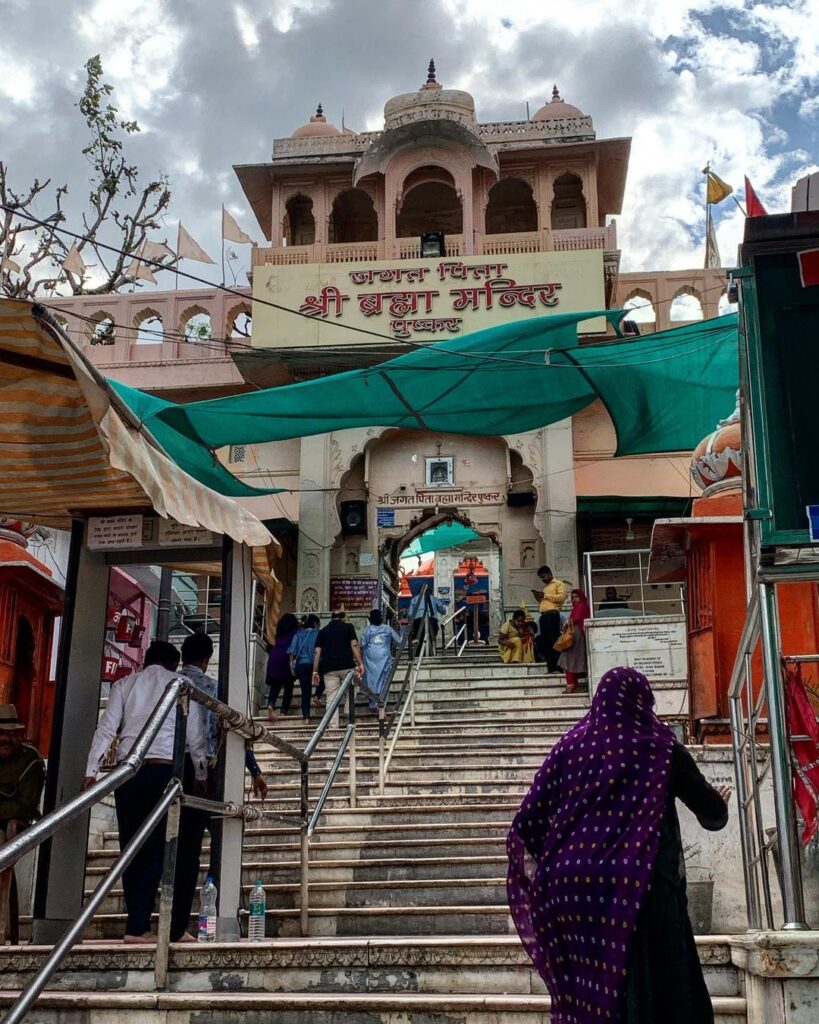 The entry from the giant gate leads to a pillared Mandapa (outdoor hall) and then the Garbhagriha(sanctum sanctorum). The main structure of the Brahma mandir/temple is made of marbles and can be easily recognized by the tall red spire. The entrance of the main shrine adorned by scripture of hans (swan, goose or crane) which is the vahana of Lord Brahma.

The main shrine houses the grand idol of Lord Brahma with four hands and four faces (chaumurti) and the idol of goddess Gayatri is placed next to Lord Bhrama. It is said that the idol was placed here by a famous priest & philosopher Adi Shankaracharya.

As a mark of offering, walls inside the temple have been edged in with hundreds of silver coins by devotees. 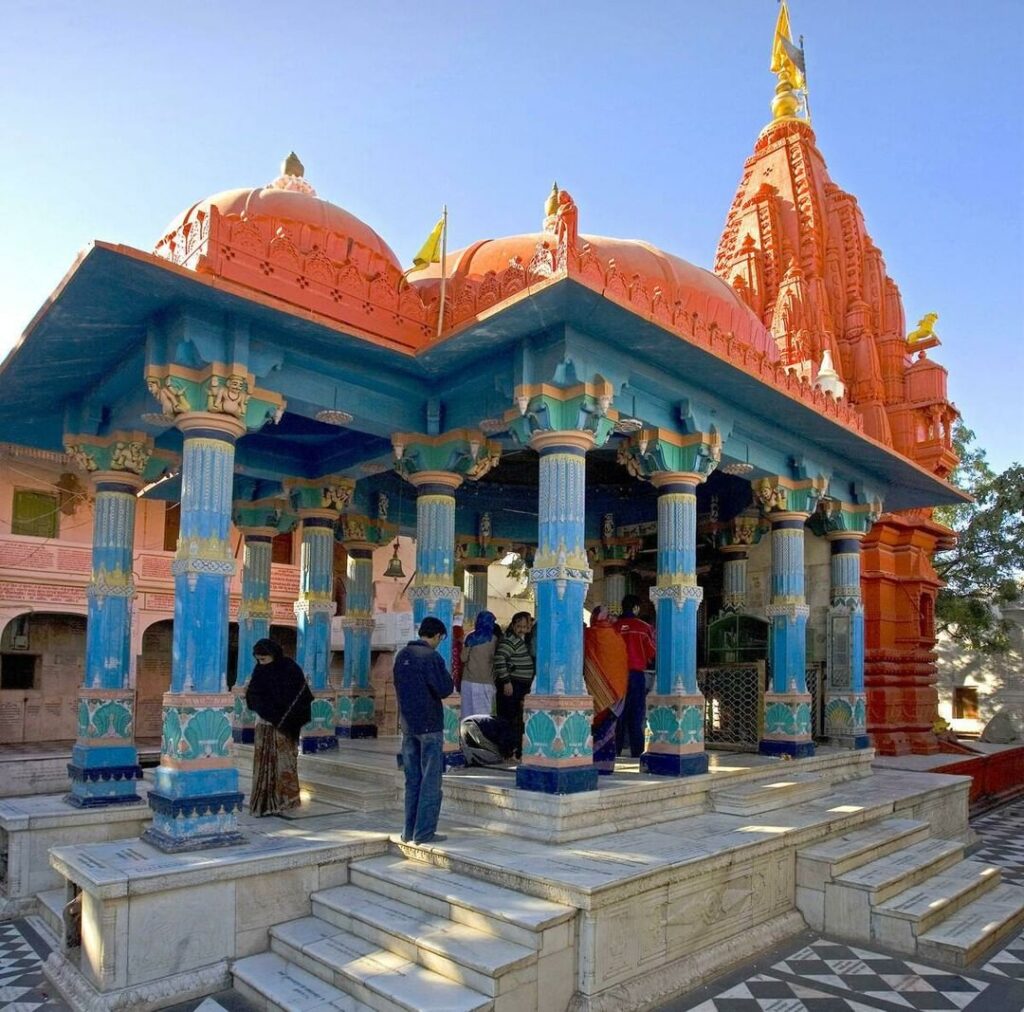 In the temple complex, there is a small cave that has an idol of Lord Shiva. Other than Lord Shiva there are various small idols of gods and goddesses in Brahma Mandir Pushkar. From Brahma Temple, you can also see the Sarasvati Temple on the top of Rathkagir hills.

The best time to visit the temple is during the Aarti which takes place 3 times a day:
Mangala Aarti – 2 hr before sunrise
Sandhya Aarti – after sunset
Raatri Aarti – 5 hr after sunset

How to Reach Brahma Temple Pushkar?

Pushkar is located 14km from Ajmer city in the state of Rajasthan. Pushkar is easily accessible by air, rail and road. The nearest airport to Pushkar is Sanganer Airport in Jaipur (150 km) and the nearest railway station is Ajmer (15 km).

Click Here to know about Travel Places in Pushkar.

Click here to know about Famous Restaurants/Cafes in Pushkar.

Click here to know about the most famous Street Food in Pushkar.